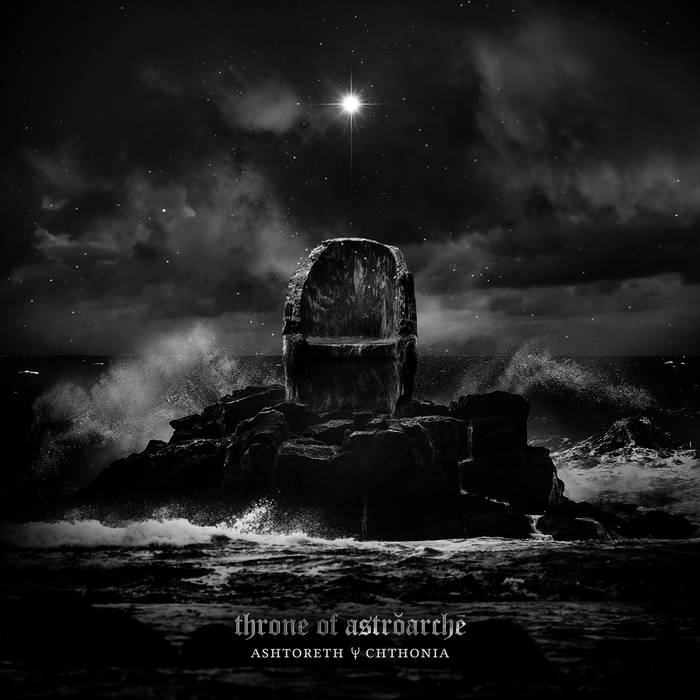 Between the shimmering celestial wastes of the Great Above and the dark-walled house of souls in the Great Below, the ancient stone stands sentient. The primordial waters whisper the name of a long-forgotten goddess, brackish waves resurrecting her sunken throne. This libation of brine and stardust, conjured and called forth by ASHTORETH and CHTHONIA is a dark ambient, devotional dreamscape, dedicated not only to the Queen of the Stars and her mirror image who dwells beneath the sea, but to all the hidden gods who have been lost within the ocean of time.

REVIEWS:
from Merchants of Air:

`You can feel this music pierce your consciousness, face your demons and battle your ego. Meditation music for the dark minded.`

`This album contains four tracks that emit an unlikely buzzing darkness. With the mysterious voice and vocals of Chthonia and the terrifying throat sounds of Verwimp, dystopian worlds are created that float on a sonic carpet of drones and soundscapes. Both artists let their ritual-filled emotions merge into deep echoing waves of mystery.
The collaboration of Chthonia and ASHTORETH on Throne of Astrŏarchē gave us goosebumps. We cannot deny that this edition is a small dark ritual ambient masterpiece.`

from Dark Entries:
`We saw in Ashtoreth an artist that was getting better and better after each album , and inevitable there is an end to such evolution. but that moment is not yet in sight, on the contrary!`

From de Subjectivisten.nl:
`It is jet black, feverish and of a surreal splendor, with the vocals or more vocals creating a mysterious atmosphere. It's like being at the cutting edge of In Slaughter Natives, S.P.K., Dirk Serries, Wardruna and Giulio Aldinucci. They bring 4 impressive, mesmerizing soundtracks for the night, which often make you gasp.`
read more: subjectivisten.nl/het-schaduwkabinet-week-25-2020/?fbclid=IwAR0zYUOZKDhgreArL1Li1lqJdR4tFMEE8UHouyZZyh4ZGaFqOoqjLQyZ0qk