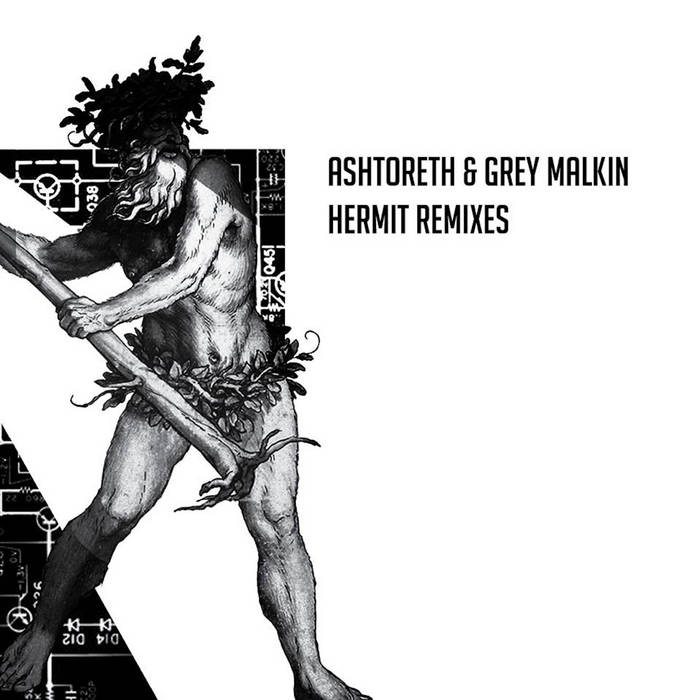 `Hermit` is the second album in a series of collaborative works between ASHTORETH and Grey Malkin, that was initially released as a limited CD by UK based, house of wyrd, Reverb Worship on May 1st 2019.
Like with the first album of the triptych this one comes again with remixes made by various befriended musicians and artists, who took their own approach to the original source material.


limited physical copies (60 ex.) were available through Reverb Worship at www.reverbworship.com, but sold out in some days. We are working on a re-issue with additional remixes.


All music written and performed by Ashtoreth & Grey Malkin.

'Hermit' was composed in response to those cold, lightless winters of the mind that we must endure.

'My real self wanders elsewhere, far away, wanders on and on invisibly.' - Herman Hesse

'I searched everywhere for a proof of reality, when all the while I understood quite well that the standards of reality had changed.'
- Algernon Blackwood

`These are, piece by piece, imposing soundscapes full of drones, doom, folk and mystique and sacral elements. They lean on tradition, but with a forward look, like a dark forest full of giant trees, their roots deeply rooted in the past, but in the here and now blossoming and growing towards the future. Dark yet intriguing, immersive and of a unique beauty.`
-Het Schaduwkabinet

`This is not just a dark ambient cooperation, this is dark, haunting and cinematic music, something that can put its foot next to the greatest in the dark and cinematic regions.`
-Merchants of Air

Since we’re apparently doing Hailstorms In May out here on the Thames Delta, here’s some appropriately chilly music.`
-Warren Ellis

`Having spent considerable time working on and listening to this album I have to confess there is only one word to describe this album...EPIC.
"Hermit" is a huge statement of intent which delivers an album of mesmerising scope. Possibly the most important and absorbing listen created by any artist/s this year.This album is a wonderful take on modern classical composition which uses tribal rhythmic drumming, ambient drone coupled with choral voices, spoken word, celestial folk and gregorian styled chanting.Add to this a twist of Ulver and Sunn O))) and I think this covers everything.`
Roger Linney - Reverb Worship

Ashtoreth's transition, both in themes as in choice of instruments and arrangements, to a wider feel without losing any of his sincerity and pledge to make totally free music is to be applauded. This is a great album and co-operation. Favorite track: The Veil.
-Walhalla radio

Enchanting, drony and organic.
An absolute gem of an album. Favorite track: The Veil.
-Skagen